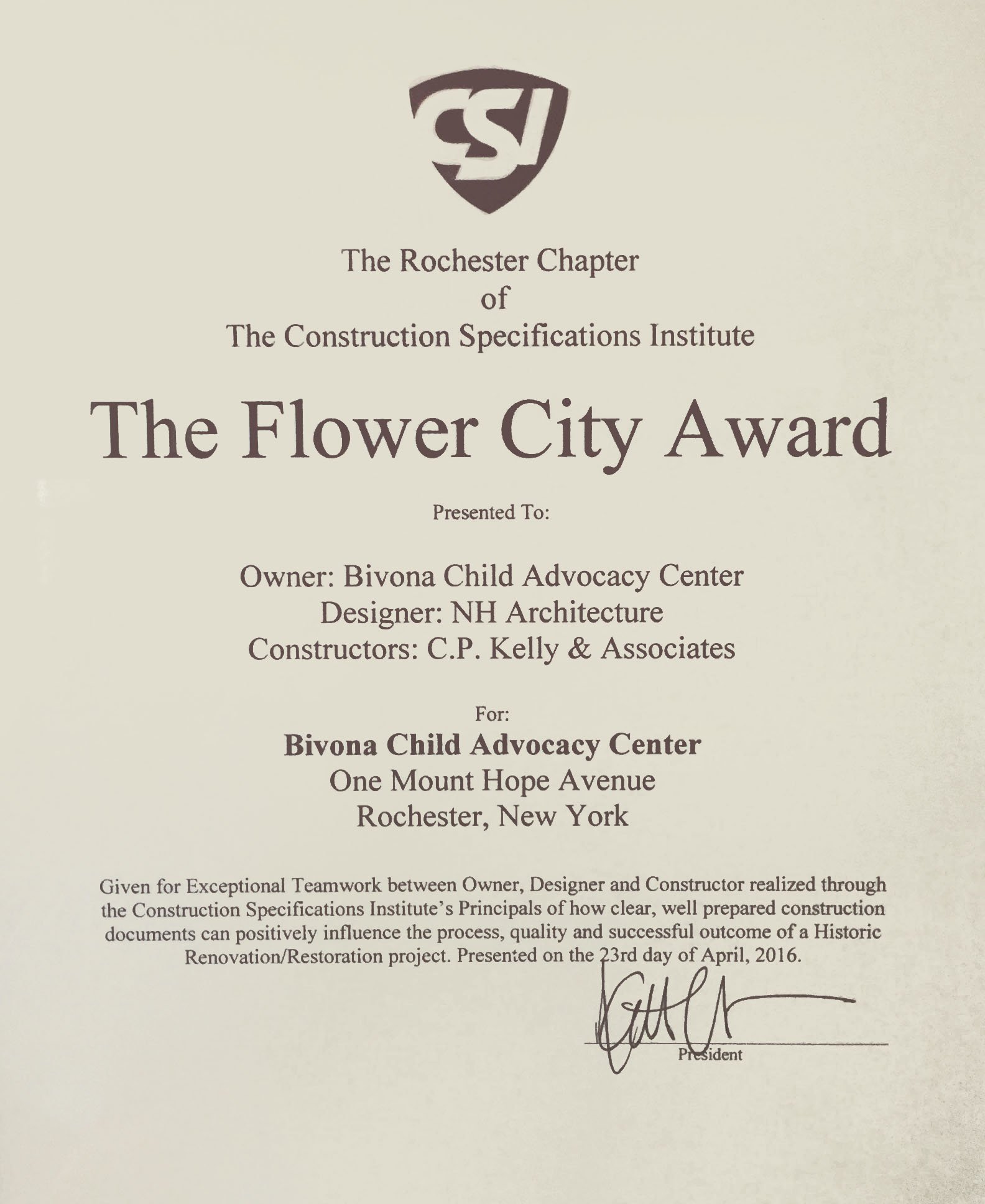 On April 23th , 2016 NH Architecture was awarded The Flower City Award given for exceptional teamwork between owner, designer and constructor realized through the Construction Specifications Institute's principals of how clear, well prepared construction documents can positively influence the process, quality and successful outcome of a historic Renovation/ Restoration project.

On March 24th , 2012 NH Architecture was awarded the Outstanding Project Award given for exceptional teamwork between owner, designer and constructor realized through the Construction Specifications Institute's principals of how clear, well prepared construction documents can positively influence the process, quality and successful outcome of a project.

In 2012 NH Architecture is recipient of the 2012 Outstanding Rehabilitation Design Award for excellence in design of affordable housing for New York State communities.

February 2008 NH Architecture is recipient of the 2008 Harley Hill Excellence in Lighting Award given by the Illuminating Engineering Society of Rochester for their work on Virtu Restaurant in downtown Rochester, NY.

"In historic downtown Pittsford sits an unassuming building designed by Norbert Hausner, Owner/President of NH Architecture, P.C., that has one of the areas true treasures hidden inside. Before design began, the client expressed the need for a place of complete peace and tranquility. They wanted a place where someone could “escape” their real life and be treated like royalty. With the completion of the “Spa at the Del Monte”, their expectations were by far exceeded. Walking into the building a person cannot help but begin to feel warm and stress free. The mixture of textures, colors, and lighting were brought together to truly create a work of art, for both the mind, and the eyes of whoever walks into this spa."

For best architectural specifications and drawings realized through exceptional team work between contractor, architect and owner in the completion of an outstanding project.

"In appreciation for your commitment and support of our work to develop affordable housing for Rochester's low income families."

"Looking Homeward" by Doug Sprei, Rochester Business Magazine, August 1992
"Its funny how the creative process works. Two custom-designed homes grace our pages this month, and stylistically, they're as different as night and day. The starting points for these homes, however, were essentially the same. In each case, the owners had purchased a unique parcel of land with special views. Then they met with architectural experts to maximize the marriage of the home and natural surroundings.
The contemporary home pictured here was designed by architect Norbert Hausner for a couple with strong affinity for lakeside living. They had resided in a Greece ranch home for 25 years, maintained a summer cottage and boat on Lake Ontario, and were looking to establish a permanent haven on the lake now that their children had grown and left the nest.
"I had planned to retire and live on the lake," says one of the owners. "Then we said, Why wait?" "We made a fiver-year plan, bought the land, sold our summer home and started to design this one. It had to be contemporary, wide open and spacious. But we didn't have a preconceived notion of what it would look like."
Enter Hausner, who heads up NH Architecture in downtown Rochester. He proceeded to create a thoroughly contemporary three-level home with flat roofing, a large western exposure exterior deck, and a two-story covered arcade for outdoor summer entertaining. "Given 25 years, this was a total departure," says Hausner. "But the situation of this house on the lake had a tremendous impact on its design. The west elevations get evening sun, when they're home to enjoy it, so there's a lot more glass on the west elevation than on the east. The western and northern exposure provides a constant 45 degree perspective of the setting sun for the master bedroom and a two-story great room."
The inner features of the home were tailor made to suit the owners' way of life. A three-car garage under the deck, hidden from view from the street thanks to unique grading of the property, provides extra space for a woodworking shop. A sewing room and a large state of the art kitchen provide settings for clothing design and gourmet cooking. Other touches combine practicality with a unique modern look: porcelain tile spreads handsomely throughout the home to provide and easily maintained lakeside living area; tubular railings sweep by the columns and a pagoda outside, and define the stairways inside. Overall, the interior is simple and uncluttered.
Contracting chores were handled by Hausner with builders Pringle & Kelly. "It's just a house for two that sort of…grew," says the owner with a smile. "Norbert took our needs and wishes well, gave us a choice of menus, and was a delight to work with.
"Designing custom homes is laborious and time-consuming for us," says Hausner, "because we get so involved with figuring out how people are going to live. It's not my house, it's their house with some of my ideas. It's not only a function of being service-oriented, either: We often become friends in the process. I guess that is why we don't do to many residential projects, because you can only have some many close friends!"

Where is Americas next hot music center? A spot that can compete with New York, Los Angeles and Nashville? No, it's not Austin, Texas, Seattle, Wash., or Branson, Mo. It's Rochester, N.Y. That's right-the home town of Kodak, Xerox, and Bausch & Lomb now attracts world-class musicians to Dajhelon Productions Inc., a recording studio with a bi-coastal design by N.H. Architecture.

One doesn't think of Rochester as a recording/production center, and until recently it wasn't. That is, until three teenagers started a band seven years ago. Whether or not the two 16-year-olds and the 14-year-old had the talent to make it big we will never find out, because they were summarily dismissed from the industry's door. Undaunted, David, Jennifer, and Lona teamed together their names, drive and talent to create their own recording studio.

Admittedly their start was small. David Schumaker, Jr., president and owner of the company, set up shop in the basement of his father's tire re-tread business. Over the years the studio nudged out the tire shop and now Dajhelon occupies the entire 11,000sq.ft. commercial building.

The client's vision was clear. "David didn't want just a nice place for the locals to package their music," says Norbert Hausner, of N.H. Architecture. "He wanted to create a cutting edge, state-of-the-art studio that can compete with the big boys." The fact that Rochester is, as Hausner says, "the hub of nothing," helps set Dajhelon apart.

"Usually the most apprehensive artist or producer changes his or her mind about Rochester by the time the stay here is over," insists Schumaker. "The city has a lot to offer, at about one-third the price of New York or Los Angeles." Considering the cost of financing a group of artists and a crew for a few weeks, Rochester starts making more and more sense.

Rochester has more than price to offer its guests. The city boasts museums, galleries, the Rochester Philharmonic and the Eastman School of Music. "Artists like it because it is not touristy at all," says Schumaker. "And they can tour around and not be mobbed."

Of course, local amenities mean nothing if the studio doesn't cut it technologically. The fact that the warehouse, built in the 1920's, had wood frame floors and masonry exterior didn't help sustain an acoustically perfect atmosphere. Hausner admits that his learning curve in this area was steep. However, consultants were called in, and computer assisted design technology was used to produce and acoustically accurate and isolated environment. The architect also employed floating floors, decoupled walls and ceilings, RPG acoustical treatments and an independently decoupled monitoring system.

Dajhelon consists of four studios, each offering a distinctive audio setting ranging from a "live" sound to something decidedly more "dead." Because the studios are connected to all control rooms, producers can manipulate a diverse pallet. They can even record different artists simultaneously in separate rooms.
Schumaker is proud of the sheer amount and diversity of equipment that can be found in the studio. What was it like designing such a technology-driven job? "We really designed around the equipment," remembers Hausner. "Of course, we over-designed the wiring capabilities for the future."

Stevie Wonder and Ray Charles aside, artists need visual inspiration when working in a recording studio. "I don't care if you have the best, most expensive equipment around," says Schumaker. "If a studio doesn't have the right vibe, the artist won't perform up to par." Since artists can be a temperamental, unpredictable breed, the right vibe varies as widely as the music. Each of Dajhelon's studios thus has its own visual persona.

Studio A is Dajhelon's largest. It maple walls and rough-hewn stone brink treatments give it a warm, comfortable feeling while imparting a polished, corporate, Los Angeles feel. Accordingly, a lot of film scores are cut there as well as business recordings.
With its cobblestone walls, parquet floors, black fabric and pine treatments, studio B feels like the underground New York City studio. "This was actually the last room done," says Schumaker. "Yet it looks the oldest." With its down and dirty, living room appeal, this room attracts the edgy set.

Artists usually record voice overs in studio C. Dajhelon's most commercial room. The gray and white interior appears professional without losing its comfort. The smallest and least expensive room is studio D. Pre-production, brain storming and a lot of Dajhelon's internal work goes on within this small yet efficient room.

Along with the four studios, the building houses Dajhelon's head office. As one might expect, the offices do not look like an insurance company. Comfort, stimulation and vibe are king, and the 17 full time employees and their guests notice and appreciate it. To keep the office fresh, Schumaker hangs work from local artists in the halls.

Unlikely location aside, Dajhelon stands as a success, with producers, engineers and independents lining up to use its studios. So far Dajhelon has worked with Warner Brothers, Sony, HBO, and EMI, to name a few. Recently, Powerstation, a famous recording studio and production company, named them an affiliate, pumping up Dajhelon's appeal.

Schumaker plans on growing the business, eventually acquiring a record label and adding video capabilities. Hausner reports that he has already felt the ripples. "This studio has really had its impact on the area and my work," he says. "I've gotten other jobs in the city from it."

Looks like Dajhelon may have started something. Rock on Rochester.

To learn more about our services, our team, or our unique approach to architecture design, get in touch with NH Architects in Rochester by calling 585-225-4310 or by writing to us through our site’s secure contact page.